The lead single from Redlight (aka Brizzle d&b demon Clipz)'s forthcoming Lobster Boy EP - put simply it's rude and tearing. The ravey Redlight sound is a great look for Clipz and it's no surprise this is picking up support from across da bass music scene (Skream, Toddla T, Sinden, Jack Beats, Annie Mac, Chase & Status, Rusko, MistaJam) seen. Good to see a video for a d&b track, so important in this day and age!

The Message Is Love (above) is SUCH a choon: only the UK could come correct with a tear out rave-grime-soca banger. I can't believe this track isn't more well known. Now the ever on point dancehall dons The Heatwave have come up with a low-slung bashment remix , which should rightly keep this momentous UK track bubbling.

Gabriel Heatwave's also put together this fiery mix for hipster mag XLR8R, highlighting the crossover between UK funky and Jamaican bashment, where you'll find British MCs spitting with a patois flow over funky house and Jamaican MCs doing their thing over UK funky.
at 08:52

Calling all club promoters: do u want £5K to put on a night? 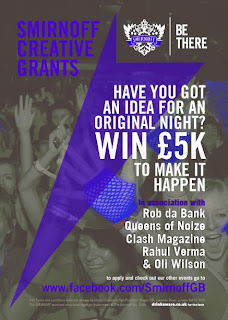 I’ve signed my soul away to the devil by becoming part of the new Smirnoff Creative Grants initiative, which gives up-and-coming promoters the chance to apply for bursaries to put on their own original nights.

In all seriousness, I’ve followed the campaign closely over the last year and it’s a project that genuinely supports and stimulates grassroots club culture, which is why I'm part of it.

Last year innovative, cutting edge nights including 3D Disco and Girlcore, amongst many many others, received bursaries to develop their vision and realize their potential.

I’m on the panel of experts for the scheme, along with several other music industry figureheads including Rob da Bank, which means I get to help choose four people and nights with really exciting ideas for events and award them £5000 to make their ideas a reality.

For more information on the initiative, the events that are being held to launch it, and to apply for a grant, visit www.facebook.com/SmirnoffGB, where you'll also find lots of video interviews on contemporary club culture.

Alternatively feel free to holla at me - I'd love for some nights I've supported over the years (you know who you are) to get involved and get some love, cash and publicity, because organising and promoting club nights is hard work.
at 13:28

So here's the chat I had with Bashy for the Marcus The Sadist preview. Rather than let reams of great quotes and fascinating dialogue fester on my mac, where it's of no use to anyone, I'm going to try and post transcripts for your perusal.

Not many people know you’re an actor
I did acting before music, not a lot of people know that, I went to Brit School and I studied it for two years, I love acting man. I’m in Marcus the Sadist, I’m filming two feature films, so I’ve got it all on the go. My acting journey has begun now. I’m in Noel Clarke’s new film 4-3-2-1. I’m in another film called Shank [directed music video don Mo] out next year and doing a play touring nationally, the acting journey for me is definitely in full swing.

How did this role come about?
I heard there was an audition for Markus The Sadist and it sounded really cool. I got introduced to Jonzi D, auditioned and went from there. I’m excited about that I can bring real life experience into developing the piece and workshop-ing it. My self and other cast members have had input so it’s been like a growing piece, Jonzi’s very passionate about hip-hop – one of the first original hip-hoppers in Britain and has a real sense of Britishness in his hip-hop.

It’s good to see a connection between old school homegrown hip-hop and the new school
That’s the beauty of the piece really - I haven’t seen the older and younger generation of hip-hoppers really bridge the gap and chat. I did it with my Black Boys remix, which had Ty on it. You don’t tend to see it that much – but this is an extension of it. The new generation does stuff together, the old generation does stuff together but we need to have a connected scene that works properly. Scene is thriving right now.

And how he has to adapt to make it?
Artists over here do try and follow what happens in America. I don’t think there’s anything wrong with that because we learn different things. What the America hip-hop industry does very well is it has a high quality look - it looks expensive. And in my personal opinion that was what was missing from over here, it didn’t really look good. The star quality wasn’t really seen much, or wasn’t made to look beautiful. If a track was talking about something gritty, it would look gritty. Which was to our benefit, because it was raw but now the element of polish is there. Which is why we’re doing well now and we understand the game a bit more.

If it’s a Jonzi D piece is there a dance element. Do you bust some moves?
There is dance in the piece and elements of break dancing; it covers all aspects of hip-hop, and also the fashion and business sense of it. Do I bust a move? Not really.


Is it a play, musical, or show?
It comes across as a hip-hop piece – not so much a musical, it doesn’t really come across like that. There is a mentality of road artists should stay road and real
We need to have the right balance – road and mainstream. We live in a world that’s more experimental; that’s why we’re seeing artists explore the freedom they have. You need to have a mass appeal to appeal, to take it to the next level, you can’t be so introverted because people need to understand. That’s why artists need to mixtapes so their core support base can get what they want artists should always have something a bit extra for them at all times. It’s about striking a good balance.

Are you enjoying stepping away from music for a minute?
I always need to refresh and take a time out whether that’s read, watch a DVD or go on holiday. I’ve been working non-stop for three years
at 11:47

I had a chat with Bashy a week ago for an interview preview of the hip hop theatre show, Markus The Sadist, in which Bashy plays the lead character, it's currently touring the UK and I'll be heading down to the Bloomsbury Theatre on October 19 to check it out.

Here's the Metro preview and the full transcript of our chat is in the post below.

MAKE A DATE FOR

‘Not many people know that I did acting before music: I went to Brit School and studied acting for two years, I love it,’ says rising Brit-rapper Bashy.

The night after the MOBOs in Scotland, where he’s nominated in the Album and UK Act categories, Bashy begins a 16-date UK tour in the lead role of Markus The Sadist, a play conceived by hip-hop theatre trailblazer Jonzi D.

Markus The Sadist uses theatre, dance and music (Bashy describes it as a ‘hip hop piece’) to chart the trials and tribulations of a young British rapper, who is presented with tough choices (such as adopting an American accent and feigning gang allegiance) to progress his blossoming career.

‘It follows the journey of a young man and how far someone is prepared to go in order to achieve his goals, and delves into the world of hip hop and grime. We also show the path of underground hip hop in Britain and where it’s going,’ he explains.

Bashy’s one of the hardest working rappers in Britain, and three years of relentless hustling is bearing ripe fruit. As a result Bashy’s brought real life experience into mix: ‘That’s the beauty of it - Jonzi, I and the cast have developed the piece through coming up with ideas and workshoping them, so it’s grown since we got involved,’ he explains in a break from rehearsals.

Bashy’s sees Markus The Sadist as an example of Britain’s old school hip-hop community working with the new school and how homegrown hip hop is blossoming: ‘Jonzi’s passionate about hip-hop - he’s one of the original hip hoppers in Britain and has a real sense of Britishness. I haven’t seen the older and younger generation really bridge the gap and chat and we need a connected scene that works properly. It’s thriving right now’

Markus The Sadist tours the UK until October 31st. Dates here
at 11:35

The Scratch Perverts (remember them? where have they been hiding?) and Shlomo star in this short film, but really the star of this is surely the motion graphics whizz Chris Cairns who talks about the promo here. Cheers to man like Stafford, aka Onetime, for the heads up.
at 08:36

Absolutely love this tune. Next level grime. And as the youtube vid highlights it can be found on DJ Magic's No Hats No Hoods Mix, which I reviewed in Metro, a few weeks back - and is frankly fantastic. You can buy it here
at 10:48

Official video for JJC (of Big Brovaz fame)'s We Are Africans single to celebrate Naija Day.
at 17:11