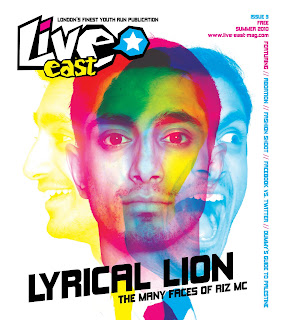 Here's the front cover of LIVE EAST Issue 3 which arrived back from the printers today. It's looking pretty slick, especially the front cover which was designed by Tom Salter and shot by Daniel Oniya, who's the editor of the Live East Website
.

Issue 3 also features a hard-hitting breakdown of abortion, a dummy's guide to Palestine and our first ever (Rihanna-inspired) fashion shoot.

I should probably break down what LIVE EAST is - it's a magazine by young people, for young people aged 13 to 22, who entirely produce (that's all the words, photography, illustrations and design) the magazine under the guidance of mentors such as myself (and Emma Warren, Steve Yates, Zena Alkayat, Hayley Joyes, Camelia Muldermans).

If you're aged 13 to 22 and want to get involved in writing (reviewing, feature writing, celebrity interviews, poetry, short stories), photography, design, illustration and digital media, drop me a line at rahul@livity.co.uk, visit the website, or pop in and see us in our Whitechapel office.

Here's a short film explaining what it's all about. And big up all our young peeps, I can't quite get over how good issue 3 looks.

South-aaaaaaaaaalllllllllll. This is by rising comedic talent Hyde Panesar, who a friend flagged up a couple of years ago. Good to see him moving onwards and upwards. Here's his Youtube channel.
at 19:12

Metro - drum & bass round up


Here's my round up of current d&b LPs in today's Metro newspaper. You can read it in on the Metro website here.

In recent years drum & bass has been eclipsed by dubstep as the nation’s preferred bass music of choice. However, the tension between the symbiotic genres has spurred creativity, resulting in d&b’s rejuvenation (ironically just as dubstep’s feeling stale): so here’s a selection of the scene’s current crop of artist albums.

DJ Fresh is a maverick: he was part of d&b super-group Bad Company, established the Breakbeat Kaos imprint (behind Pendulum’s early releases) with Adam F, reconfigured drum & bass’ DNA to incorporate electro and has since worked with the Pet Shop Boys. DJ Fresh’s second LP, Kryptonite is typically free spirited – the intense Talkbox, infusing high frequencies with murmuring electro is set to a pummelling backdrop, and the ominous Acid Rain’s choral intro gives way to the piercing hum of swarming bees. Elsewhere Starfall wrong foots at every turn as electro house explodes an off kilter rhythm topped with Val Beestings punk vocals, and Heavyweight is a hum-dinging fusion of electro, bass and drums. Kryptonite confirms DJ Fresh’s ability to operate simultaneously inside and outside the d&b box.


Klute’s an unsung d&b hero, who’s built a reputation as the producers’ producer over the course of five albums ((Pendulum, Goldie and Marcus Intalex are fans). Sixth LP Music For Prophet is becoming of a confident, skilled producer – Klute crafts a tearful symphony from rippling piano melodies, hand claps, strings, and a galloping rhythm (Knowing How To Get There). He incorporates unexpected influences: a rumbling didgeridoo melts into molten sub-bass (Make It Stop), Ashram suffuses ‘nightingale of India’ Lata Mangeshkar’s crystalline tones, with comforting bass, sitar and tabla. Of course Klute’s capable of dancefloor damage, as the stocky Buy More Now’s combines serrated bass with driving drums. Music For Prophet is not so much cinematic drum & bass, but a 3-D IMAX experience.

Utah Jazz’s second LP Vintage is a long player in the proper, old school sense, in that it’s an album that’s been painstakingly crafted and oozes finesse and attention to detail. It’s fair to describe Vintage as lush, instrument-led soul and funk imagined through d&b. Opener Comfort Zone’s sweeping strings, twinkling ivories, and measured progression, sets the tone. The sun-kissed Bring Back The Love’s filtered soul, and funk licks, is what Roy Ayers would sound like if he made d&b, and Take No More has more emotion than a Bollywood film. There’s variation too: both Enter The Jungle, where the Ragga Twins cut loose over cheery, choppy jungle, and NRG 93’s rave stabs, shuffling breakbeat and speeded up vocals, are glorious examples of riot music – nevertheless both retain a musically rich, textured quality that characterizes Utah Jazz’s output. 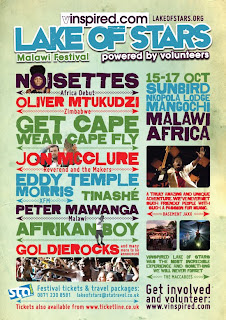 A documentary film by Michael Lawson, presented by Anjali Guptara

Followed by a Q&A Panel Discussion

Chaired by Dharshini David (Sky News) - Panelists include Director Michael Lawson and Lady Kishwar Desai (Chair of "Tongues on Fire", London's Asian film festival, and author of "Witness the Night", a novel that delves into female gendercide in India).

Even more remarkable, he created his buzz when filming homemade ‘lessons in how to make a hit’ for his Youtube channel, starting in January 2009 (‘Les Leçon De Stromae’ or ‘Stromae’s Lessons’). Lesson no. 8 ‘Alors On Dance’ became a viral sensation and then a real hit on Europe’s radio airwaves, getting to no.1 across the continent and running up 7 million Youtube plays.

It started when the internet excitement from his music production Youtube shows caught the attention of DJ Julie on the dance specialist NRJ Mash Up Show of France’s biggest radio station in June 2009. Getting rave reactions on the specialist show it was moved to playlist rotation proper and from there it shot to no.1 in both France and Germany.

Stromae’s has had the first #1 single in Germany in the French language since 1988. With English speaking clubs and blogs worldwide already heating up for ‘Alors On Danse’ this product of global list of influences could end up sitting on a global hit.
at 08:55

I'm a firm fan of man like Skandal - here's a previous post on him and a couple of reviews of his Hunger Pains mixtape for Metro and The Independent:


Independent Review (which resulted in nuff messages from Skandal - that's another reason to like him, he's a polite, gracious soul too)


Here's some more info on this track:


Tipped by everyone from BBC 1XTRA, THE GUARDIAN, THE INDEPENDENT, TIME OUT, THE METRO, DJ MK & SHORTEE BLITZ, DJ 279, CHARLIE SLOTH and many of his peers as one to watch for 2010, SKANDAL delivers this his first single from forthcoming mixtape ‘HUNGER PAINS VOL 2’.

Not one to sit about, actually he literally can’t, SKANDAL soon followed up the first ‘Hunger Pains’ mixtape with the monstrous ‘Kill Em With The Flow’ Remix that brought two giants of their realms together, P-MONEY and KLASHNEKOFF. The track didn’t just tear the roof off, it blew it away soon after it was given it’s first play on MISTA JAM’S RADIO 1 show!!

‘EVERYDAY’ produced by JON PHONICS and featuring SB.TV F64 champ BLACK THE RIPPER, will be released on 19TH JULY on iTUNES, AMAZON, 7 DIGITAL and all other good digital retailers.

One word: ouch. Kind of interested in the background to this, why is Lowkey sending for Chipmunk??? If anyone's got the inside story. HOLLA.
at 16:45

Free (legit) download from One To Watch - Context MC

Introducing Context MC. Above is his single Feeling Alone, which Charlie Sloth (featured on this blog in March 2009) premiered on his 1Xtra show.


Anyways, keep on eye this Norwich rapper. And you can download Feeling Alone for free here
at 16:30

Remember when Macy was one of the most distinctive, beautiful voices in pop? Oh how the mighty have fallen. I once bumped into her at a hood-d&b dance (gun detectors on the doors) in Manchester in the early noughties.

Macy’s fourth LP, The Sellout is a break up record: ten of the 12 tracks focus on heartache, winning back the ex, begging for another chance, the meaningless of single life and, bizarrely, using stalking as an analogy for love.

It’s wearing, crushing (there’s no rebirth) and the bad - including banal lyrics such as ‘Baby I would kiss you/Even if you have flu’ (Real Love) and ‘Just like a palm tree/people surround me’ (Lately) and occasional use of Autotune to iron out the kinks in her delightful raspy voice - outweighs the good.

Rare highlights include the blissful g-funk of current single Lately, the sprightly 1960s soul of Kissed It and playful Thatman, which reworks the theme tune of 1960s TV series Batman. Get your tissues at the ready for Macy cutting a forlorn figure, who musically appears to have lost her way.
at 09:42

My review of Giggs debut LP Let Em Ave It in today's Metro. I'm definitely copping the HMV version of the LP as it's got a bonus CD with his biggest anthem, Talkin The Hardest. You can buy it here.

The notion of ‘British gangsta rap’ sounds, well, a bit weird. And this is the mountain that Peckham’s Giggs must conquer in his quest to convert huge underground following, into firstly mainstream acceptance and then success.

Debut LP, Let Em Ave It has all the right ingredients as Giggs triumphs against the odds: he survives drug dealing, prison, abandons the ‘greazy life’, and succeeds in rap despite the ‘Fedz’ (police)’s alleged campaign to shut Giggs down, and radio and TV’s reluctance to playlist his music.

Giggs’ struggle, voice and insights are unique (‘I’m talkin’ ‘bout crack in the stairways,’ as he puts it), and his s-u-p-e-r s-l-o m-o flow permeates woozy Southern-style production to peculiarly soporific effect. At 71minutes the LP loses direction but Giggs has taken a sizeable stride towards that summit.
at 09:25

My boy Albert showed me this as were discussing the new Giggs LP, Let Em Ave It, which is out on Monday. I've reviewed it for Metro newspaper. I'll post the review once it's out in the paper. And if you're a fan homegrown hip hop, cop the record and support UK.
at 13:21

“Baltimore Clap” follows a hapless little chap on a terrifying journey
through a cavernous clap factory.