Heavy, heavy choon. This is one talented mofo, whether it's acting (Britz, Road To Guantanemo, Deadset, or forthcoming film Shifty), or rapping he's gonna go far. Respect.
at 19:56


My review OF N-DUBZ new album which appeared in Metro today. I do have to say it's really different, interesting pop music!

Rappers Dappy and Fazer, and singer Tulisa, are pop idols in the eyes of teenagers – singles Papa and Ouch have racked up more than 2million and 5.5million YouTube views respectively.

On debut album Uncle B, N-Dubz's powerful r'n'b-style pop draws on the everyday (school, bunking off, love and heartbreak) while Middle Eastern melodies, epic strings and reggae inflections ensure the mood is upbeat.

Throughout, Tulisa's soaring vocals leaven Dappy and Fazer's fiery flows, particularly on the grimy N-As Vs N-Dubz, while her riposte, Ouch, to the preceding infidelity anthem I Swear is a clever touch.

Uncle B is a promising, unusual debut that frames inner-city youth experiences, good and bad, in street-savvy pop.
at 16:49 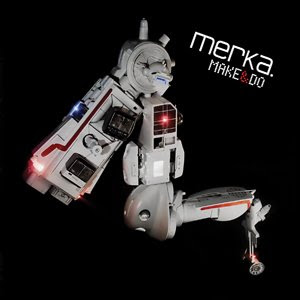 My Merka album review for Metro newspaper on November 10th. Quite why I was asked to review it I'm not really sure, it's not my place to reason why, just do what I'm told as a humble freelancer: personally I think Buraka Som Sistema's LP is far more interesting. My review of that for the Independent is soon come...

Australian producer Merka’s long been associated with breaks - he’s signed to the one of the genre’s leading labels (Fat). However, like so much dance music in late 2008, Make & Do draws on a kaleidoscopic range of sounds – often in one track: Back Home leaps from deep house to playful electro and is topped with pianos and a disco chorus; Lucky Strike is a collision of Michael Jackson-esque pop, film score strings and electro-bass; early rave’s shuffling breakbeats, euphoric bleeps and hands in the air vocals, and edgy hardcore as it morphed into jungle, also feature. Make & Do blends 20 years of dance music without feeling incongruous, and is simultaneously nostalgic, future facing, and a sign of the times.
at 10:50