The Hood Internet: The Trillwave
Mishka

Opening with original songs sampled in hip hop anthems (the psych-funk of Quincy Jones’ Summer In The City is the basis of Pharcyde’s Passin Me By), Summertime revisits vintage hip hop including Ice Cube’s languid g-funk, A Tribe Called Quest’s bright and breezy jazz-rap, and Black Moon’s combo of dreamy production and punchy rhymes. Seductive R&B (Montell Jordan, Jodeci), iconic soul (Dionne Warwick, Maze), and early- Michael Jackson, melt into the heady mix. Summertime’s nostalgic but so is summer, it’s also edutaining, brimming with timeless music and shows hip-hop’s golden age was built on sturdy foundations provided by the 24-carat era of American black music that came before it.

Hip-hop freshman Asher Roth revels in his outsider status as a ‘burb-raised, graduate rapper. Roth’s Seared Foie Gras mixtape with DJ Wreckineyez (asherrothmusic.com/#/exclusive) consolidates his wisecracking, prep-rap persona, as he takes on instrumentals by Madlib, RZA, Pharrell, J Dilla and Just Blaze, and veers between deadpan funnyman, and insightful analyzer: Con-Fid-ence switches from eulogizing getting high to achieving goals to celebrating humanity as one. SFG shows how mixtapes can offer more of an appreciation of an MC’s character and prowess than a commercial release, and shows off a witty, accomplished MC, with a broad frame of reference (James and The Giant Peach, Buddha, Dr Octagon). However, it seems Asher’s caught between being the hip-hop boffin and playing the class joker – he is, of course, more than capable of balancing both.

Brooklyn trio Das Racist, Himanshu Suri, Victor Vazquez and Ashok Kondabolu, has stirred the Stateside music press and bloggers-nest with hipster dude-rap (breakout hit Combination Pizza Hut and Taco Bell, is two stoners shouting, ‘I’m at the Pizza Hut’ ‘I’m at the Taco Bell’). Debut mixtape, Shut Up, Dude, (dasracist.net) is a curious blend of more brainless rap (Chicken & Meat), commentary disguised as torrents of consciousness and genuinely funny efforts such as Fake Patois, highlighting affected Jamaican accents from Jay Z to Jim Carrey. Das Racist’s frame of reference is far broader than most hip-hop thanks to their Indian and Cuban/Italian heritage – they must surely be the only rappers to reference Nehru, Gandhi, Maya Angelou, MoMA and rapper Bow Wow in a single (Hugo Chavez)? The debate as to whether Das Racist is ‘retardo’ (their own words), a joke or something more meaningful continues to rage…

Flying Lotus is a total genius and all round nice guy. I've had the pleasure to interview him twice and what a gent and all round interesting, spiritual and open minded guy.

A second cut from his self-proclaimed “space opera” Cosmogramma, MmmHmm features renowned bassist Thundercat (Sa-Ra Collective, Erykah Badu, Suicidal Tendencies), who contributes vocals as well as bass to this sublime track and also stars in the video. Directed by Special Problems and commissioned by Warp Films. 'Mmmmhmmm' is out August 16th.

WATCH IT NOW AT: FLYING-LOTUS.COM/MMMHMM

Three very different and special London shows in a week – two of which are already sold out – we are delighted to now announce the full line-up of future-bass leading lights for the Brainfeeder club night, (curated personally by Flylo) which opens the series. To refresh your memory, Brainfeeder will take place at Hearn St. car park on Saturday 14th of August:

Kutmah – Amazingly the first ever London show for the UK-born Kutmah, one of the most influential and accomplished DJs and inspirations in the LA scene and key contributor to the renowned nights Sketch Book at Little Temple and Low End Theory at Airliner.

Lorn (LIVE) – After the massive response to his début album Nothing Else (the second release and first ever full length album on Flying Lotus' Brainfeeder imprint), Lorn appears for the first time in London with a new live show.

Actress (LIVE) – Representing this side of the Atlantic, London’s Darren Cunningham is likely to air cuts from his thrillingly innovative second LP Splazsh and the stunning début Hazyville.

Teebs (LIVE) – Debut London show after his amazing live contribution to this year’s Brainfeeder Radio 4/20. Will soon release his début album on the Brainfeeder label.

Dr Strangeloop (LIVE) – Having released a mini-album of electronic psychedelics Are We Lost Mammals of an Approaching Transcendental Epoch? on Brainfeeder, Strangeloop (Dave Wexler) is also a long-term visual collaborator with Flying Lotus, performing Heaven & Earth Magic with FlyLo at the Tate Modern (16th) as well as Brainfeeder on this trip.

Featuring contributors and players from Cosmogramma including: 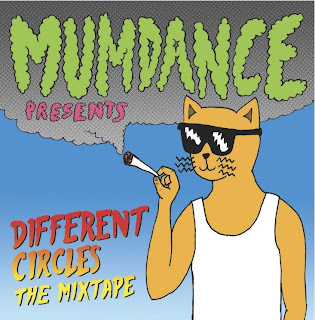 So Mumdance is a name you're probably familiar with if you're into grime, funky, or Mad Decent-style global ghetto dance music. I had the fortune of interviewing him for his biog notes and Jack is a top top lad, who's genuine in his passion and commitment to cross fertilise sounds and styles.

He's the man behind Jammer's 10 Man Roll and has loads of music coming out in the next few months including an EP on Mad Decent and a killer Trim/Jammer collab on No Hats No Hoods.

Here's his Different Circles Mixtape - which is actually a great taster of what he's all about as it's 17 of his past, present and future riddims. And bwoy are they dancefloor!

Collated as a pre cursor to his Forthcoming "Mum Decent EP on Mad Decent (Released August 23rd) as well as showcasing a host of other releases on Trouble & Bass, No Hats No Hoods & Big Dada, this is a definitive guide to whats next.

Originally blogged on this three weeks ago - single's out on September 5th and so is the LP.

Even more remarkable, he created his buzz when filming homemade ‘lessons in how to make a hit’ for his Youtube channel, starting in January 2009 (‘Les Leçon De Stromae’ or ‘Stromae’s Lessons’). Lesson no. 8 ‘Alors On Dance’ became a viral sensation and then a real hit on Europe’s radio airwaves, getting to no.1 across the continent and running up 7 million Youtube plays.

It started when the internet excitement from his music production Youtube shows caught the attention of DJ Julie on the dance specialist NRJ Mash Up Show of France’s biggest radio station in June 2009. Getting rave reactions on the specialist show it was moved to playlist rotation proper and from there it shot to no.1 in both France and Germany.

Stromae’s has had the first #1 single in Germany in the French language since 1988. With English speaking clubs and blogs worldwide already heating up for ‘Alors On Danse’ this product of global list of influences could end up sitting on a global hit.
at 10:08

Live PA from last night's Pro Green launch party - as Ara Jump Off has been tweeting, it's overly emotional to see how far Steve has come since being Jump Off champ around four/five years ago. Good to see natural talent succeeding, kind of restores your faith in the sometimes grossly unfair music industry.
at 10:05

An illicit love triangle between Michael Jackson, Gnarls Barkely, and a trombone.....

An 8- piece horn and percussion ensemble born on the streets of East London, Brassroots oozes a groove and energy fed by musicians from a England, Israel, France, Greece & America.

With the noble aim of re-establishing a flourishing brass band scene in London, the group has unleashed knock-out shows at Scala, Glastonbury, Secret Garden Party and an amazing 7 shows at Bestival. Continuing to blaze a trail through the London music scene in less than a year of existence, Brassroots have already earned radio play on BBC Radio 1 with Rob da Bank and plan a full world takeover by next year. Witness the start of the revolution!

Leaving fans screaming at the top or their lungs for more is the calling card of Brassroots, who are poised to bring a brand new energy and appeal to the hugely under-rated genre of Brass music.

Brass bands are cool again. You heard it here first.

The more I see and hear from Jay Electronica, the more excited I get. True-school hip hop is coming back. If you haven't downloaded his Victory mixtape, do it, do it, do it - it's my most listened to record of '10.
at 14:47

Controversial stuff - this vid has been banned by MTV and Youtube. The documentary style video was shot over a hectic 5-day period during Rusko’s recent UK tour. Currently banned by MTV and removed from YouTube.

The single – which features vocals from Amber Coffman of Dirty Projectors and remixes by Sub Focus, 12th Planet and Tom Stephan – is released on 12th July via Mad Decent.

Rusko returns to the UK this August to perform at Creamfields and Reading & Leeds festivals.
at 17:35