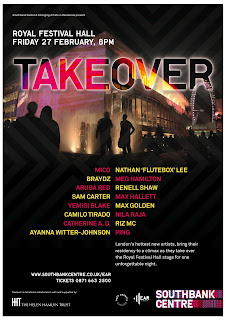 This Friday the Southbank Centre's Emerging Artists in Residence (EAR) 'takeover' the grand Royal Festival Hall for their final performance. Essentially it's a chance to see some of the UK's brightest young music talent before they become stars.

Personally I'd recommend Nathan Flutebox Lee who beatboxes through his flute, Nila Raja's beguiling songs, and Riz MC's sharp, slick rhymes. (I saw Riz last Thursday and he was waxing lyrical about this performance and some very exciting plans for working with the Southbank Centre.) Also keep an eye out for Aruba Red who appears on Nitin Sawhney's current LP, London Undersound, and established artists including Natty (who also appears on Nitin Sawhney's LP with a chillingly touching account of 7/7, Days Of Fire), and rising grime MC Chipmunk, who also appear. All for £6. Bargain alert!!!!
at 21:55

My piece on d&b in 2009, which appears in today's Independent.

End of dumb & base

The British-born genre of drum & bass set dancefloors on fire for breathless ravers in the Nineties. Soon it became one-dimensional 'clown step'. A new generation of writers and producers is changing all that, says Rahul Verma

What has happened to drum & bass? In the mid to late 1990s, the breathless fusion of rave, Jamaican sound-system culture, and samples spanning dance hall to jazz, was the most thrilling and futuristic music on the planet. The British-born genre went on to captivate dance floors around the world through icons including Goldie, Roni Size and LTJ Bukem.

Today it's part and parcel of contemporary culture, regularly adding edgy cool to TV adverts, CSI and even Girls Aloud (check single "What You Crying For"). However, save for Marky's slinky Brazilian spin on the genre, and Pendulum's populist rock & bass, new progressions have been in short supply in recent times. Drum & bass just hasn't gone anywhere.

Even its grip on dance floors is loosening as ravers, tired of brainless anthem-bashing, flirt with dubstep and funky. D&b's failure to capture hearts, and minds outside of a dark sweaty environment means it's often dismissed as rudimentary and one-dimensional and ridiculed as "dumb & bass" and "clownstep".

However, the green shoots of recovery that began peeping through the topsoil with Commix's Call To Mind LP in late 2007, have been watered by last year's Chase & Status's More Than Alot album, and are set to flower in 2009. Blame and Selah's soaring, euphoric "Because Of You" is all over Radio 1, as is Chase & Status's "Against All Odds". The juicy bongo funk jam starring rapper Kano, abetted by a slick Blaxploitation style video, is destined to chart.

"Our album is a kaleidoscope of UK music right now and where we are in it. We really believe UK music is the most exciting and fast moving in the world, we set trends here," says 27-year-old Saul "Chase" Milton.

"We never thought, 'let's do an album of different sounds' – it just happened naturally because we're so into different types of music and bringing in the influences around us made sense," says Will "Status" Kennard.

Milton and Kennard couldn't be further removed from the stereotype of d&b producers holed up in bedrooms driving their parents and neighbours to despair with window-rattling frequencies. The duo's studio is in London landmark County Hall in a complex owned by pop mogul Pete Waterman. They often pop out to the South Bank to rest their ears.

Chase & Status go against the drum & bass grain of focusing on "underground" fans – and they write songs. "We've got new fans. When we DJ, there are lots of young girls who have heard our music on Radio 1 and bought the album. That's bringing new fans to d&b, who are drawn to it by songs," observes Milton.

Radio 1's Annie Mac is a fan of Chase & Staus: "Chase & Status have managed to make an album of now, it's got dubstep, breaks and hip hop and appeal beyond drum & bass, yet they're respected in the scene," she explains. Mac believes that d&b has matured. "Labels are much more professional these days, and they're putting out proper albums. Drum & bass isn't known for albums because it's been centred on singles and dubplates, but drum & bass has really pulled its socks up."

Kennard agrees: "Drum & bass has become more business-minded, it's dipped into the mainstream a few times and is established worldwide. Now there's a broader fan base, more money involved and less of an underground mentality. "

Newcomer Mistabishi, whose forthcoming LP Drop is another example of bright, inventive d&b, believes producers focused on DJs too much. "The music became very centred on what happened in the DJ booth and that clique, which meant the end product was for the DJ not for a raver or listener. It's changed now, the climate's right for my album."

Cambridge pair Commix (Guy Brewer and George Levings) also revel in flipping the d&b script. Take their sublime mix for the globally renowned London nightclub, Fabric, for example, which surprisingly isn't aimed at the dance floor. "When we were doing the Fabric mix we thought 'who are we writing it for?' People listen to these mixes at home or an iPod so we don't want to just tear this out. You go to a dance floor for that," says Levings. "We wanted to set a vibe, present an interesting cross-section of music and make sure it flows well, rather than play three minutes of the 20 big tunes of the moment," explains Brewer.

Drum & bass is on the cusp of an exciting "beyond dance floor" era led by producers including Commix, Chase & Status, Sub Focus, D Bridge, Instramental and Alex Pirez. "What we do is not just about moving kids on a dance floor but creating an interest so that people want to listen to drum & bass at home. It appeals to people interested in a broad spectrum of dance music," continues Brewer.

Chase & Status' collaborations with Brit-lyricists – Plan B, Kano, Roll Deep's Scratchy and Trim – astutely broadens d&b's appeal (and market). "We made a point of not working with singers from drum & bass and with vocalists from outside of the scene so we got that crossover between genres," says Kennard.

Commix hope that one day d&b – like techno – will develop an intellectual and conceptual dimension. "In techno you're allowed to experiment. There's so much room to breathe and it's not just about the dance floor," says Brewer. "We want d&b to be seen as credible music not just rave music."


GrimeSka? Reminds me of Madness. Watch out for man like Goldie, with cameo of his Angel bad bwoy character from EastEnders at the end of the promo
at 11:05 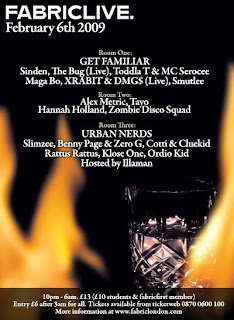 Ok so I'm late in posting the image, but Smutlee's mix to commemorate his Fabric debut is FRESH, BIG and BASHY and available here

Here be the tracklisting. I'm loving the way that dancehall, grime and anything with big bass is crossing over.

Virus Syndicate - For The Music 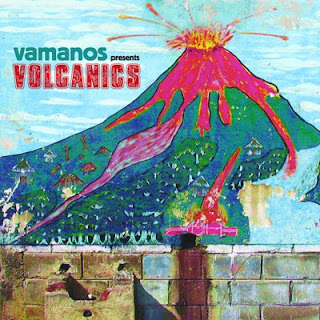 I've flagged up Brixton boy DJ Vamanos before and he's just back from Nicaragua, where he found some crunching, booty shaking sounds spanning bassline, reggaeton, and merengue. And it's mixed, blended and downloadable for free right here! You can find Vamanos myspace here, and hugely fascinating blog with a brilliant name (ghettobassquake - what else do you call raw global ghetto music) 'ere
at 17:53