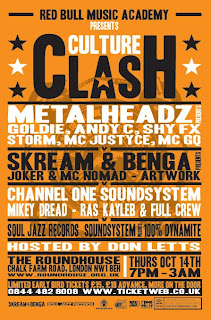 Check it out. How big does this look? I'm currently writing a story for the Independent around the history of soundsystem culture in the UK. Thus far, I've chatted to Goldie - who's still seething from the bantering (or disrespect as he's calling it) from the first Culture Clash in February - Don Letts (a total gent and super on the ball) and Soul Jazz Records. I do love my job.
at 17:23 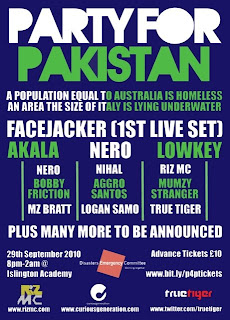 So this Wednesday is Party4Pakistan, which as the title suggests is fundraiser for the victims of the floods in Pakistan. I've been disappointed, and discussed it at length with my nearest and dearest, by the lack of fundraisers organised in clubland - there were at least between 5 and 10 when the Haiti earthquake happened in January.

It's not just clubland either - there's deafening silence across the arts when it comes to raising money for those made destitute in the recent floods. Why? Is it the way the media reports Pakistan - hotbed of terrorism, unstable, corrupt and generally a failing state, disaster fatigue, mistrust of allocation of funds, or anti-Islamic? Who knows it's probably a combination of all of the above.

All I know is that these are people who are suffering, people like you and I, and for anyone that's South Asian, like it or not, these are your brothers and sisters. So please put your petty religious squabbles aside - like everyone performing whether Riz MC, Plan B, Bobby Friction or Nihal - has realised this is for people who are desperate.

Anyway enough of the sermonizing, here's an exclusive with Plan B talking about a bhangra remix of She Said:


And some audio from Fonejacker who makes his live debut on Wednesday.

And here's an amazing graphic of the flood affected area transposed onto the UK. In case anyone's forgotten, a fifth of the people in the world's sixth largest country are basically effed. Spread the word and tell a friend.

Big up Riz, Anealla and all involved in putting this on.
at 14:17 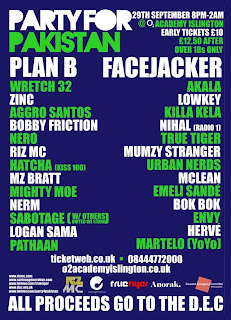 So I've been doing the Top 10 Clubs for The Independent for a few years now, and I suddenly thought I'd post what I've been doing on a week to week basis and give myself and the nights a bit of a plug.

This week is all about Party For Pakistan. Here's the flyer. Represent people, it's for a good cause and that's about as far as it goes. In other news the Habit warehouse party with Henrik Schwarz and the Rustie EP launch are looking tasty!

A fundraiser for the floods in Pakistan starring rappers Riz MC and Plan B who will combine for a comedy take on Ant and Dec, as well as rising R&B/dancehall star Mumzy Stranger, and Radio 1’s Nihal and Bobby Friction

An electronica smorgasbord drawing on talent from all over the world including Detroit’s Urban Tribe and The Hague’s Legowelt, Dallas Convextion all performing live.

If I wasn't under the weather I'd definitely be going to Electric Minds and would love to check out James Blake, Ramadanman, Dark Star - each of these in their own right are absolutely brilliant. I'd be a little wary of XOYO coz it will be young, hipster central and I'd mainly feel old.

London’s world-class clubbing scene appears to have taken a battering over recent years with the closure of iconic venues including The End, Turnmills, Canvas and The Cross, and Matter’s temporary shutdown. However, it’s simply the circle of (night) life, as London clubland is reinventing itself through smaller and agile (multipurpose) venues.

Take for example new 800-capacity Old Street ‘events space’ XOYO: upstairs can host live acts and arts events during the week, while the downstairs is also capable of hosting gigs, as well as club nights. The team behind it certainly has the brains and experience to push the raving experience forward: XOYO is the brainchild of Cymon Eckel (behind the cult 1990s fanzine, label and night Boys Own, and east London boozers The Griffin and The Britannia), Tom Baker (cutting edge promoters Eat Your Own Ears), Marcus Weedon (Field Day, Underage) and Johnno Burgess (Bugged Out! Jockey Slut). 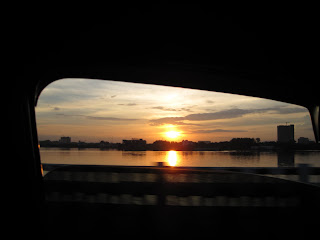 So I've been away on holiday in India - south India (Chennai, Bangalore, Andaman Islands) to be precise - then the West Country (Shropshire) and then France (Aubusson), hence the lack of bloggage. I'm back now and admittedly I've been slack in posting, but that's the point of a holiday, and easing back into things is one of the few joys of the post holiday comedown.
at 16:28