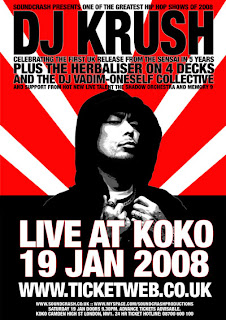 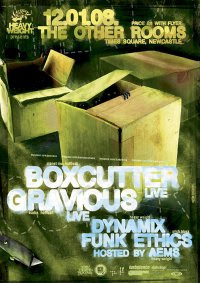 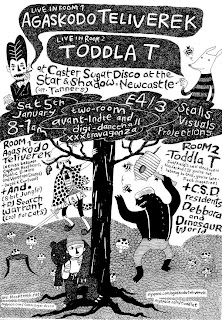 Everyone knows of Newcastle's reputation as a party city, but maybe more in terms of the Bigg Market, Tuxedo Princess (big party boat by the Tyne Bridge), and guys in shoes and shirts and girls skimpy dresses 'getting mortal'. However the alternative, underground music scene is strong too: check these two nights in early January. Big up to Dynamix for pushing dubstep in Toon, and guys like Ghetto Method for their art/hip hop jams.
at 11:59 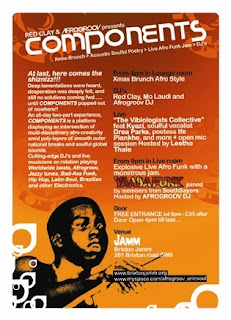 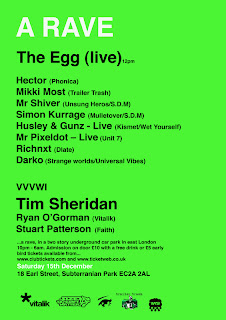 This is over two floors of a car park in Liverpool Street... Hopefully it won't be -5C on Saturday night, coz that would involve some pretty nutty dancing to stay warm.
at 15:30 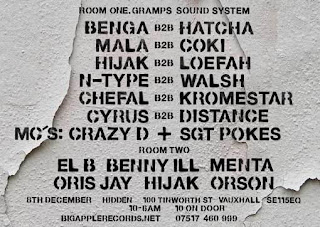 The festive season rocks for great parties and raves, like the above. I'll be heading there after going to review MIA at the ICA (weird venue for her to play). And here are some more fab raves that I'll be checking out in the coming weeks.

You'll notice that none of them are in formal clubs or superclubs, because frankly I can't stand them. Last Saturday I ruined a wicked night of club hopping (four venues in one night, brap!) by deciding at 2.30am it would be good to goto BBE11 at Canvas... we left after half an hour. That'll teach me to lavish my hard earned cashola on taxis.

It took 45 minutes to get in to Canvas, there was an hour wait for the cloak room and the queue at the bar was six deep. And there was no vibe, just loads of drug fucked zombies convincing themselves it was wicked. You couldn't get to the soul room as the hip hop room was rammo and shocking out to DJ Premier playing Ante Up - come on Primo we don't come and see you to hear you play the most obvious hip hop records on the planet. The biggest waste of two hours of my life was was summed up by the Canvas cab office vitriolically bollocking (and revelling in it) our humble, elderly taxi driver for not having receipts - tosser. The quicker Canvas is razed the better. I've raved there since 1994 and have amazing memories from 1994-1996, but I can't wait for it to be wiped off the London clubbing map: the way that venue treats people is beyond comprehension. Why does anyone enjoy being treated like cattle (ie shit).

Maybe I'm getting old but it's all about intimate, informal spaces like Corsica Studios, parties in pubs, basements of Jamaican cafes in Clapham North or Dalston (where you can smoke), warehouses, and anything other than proper clubs (DMZ at Mass excluded). 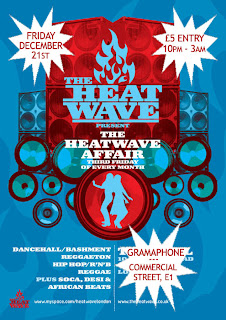 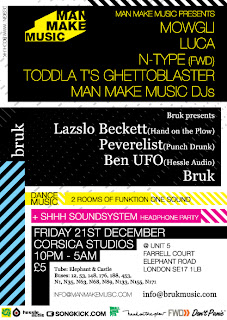 Last but not least - infact the opposite is true, save the best 'til last - is Man Make Music versus Bruk. Check this line up of NType, Toddla T, Luca and Peverlist for five english pounds. Now that's what you call value for money for a soundtrack of future bashy, bassline music. Toddla T, N Type, Luca or Peverelist would be worth the £5 entry alone. Hell most poncy bars charge more than that to get in. See you on the dancefloor.
at 11:39

This is still a badman tune and the biggest UK street anthem of this decade. No record tears down the dance like this. Big up to Mighty Mo for the video: three years later and he's doing big things, and is one of the most in demand music video directors on the block. Here's my review of Lethal Bizzle at Islington Academy, that appeared in today's Independent.

The 24-year-old from east London has spent 2007 growing his appeal by reaching out to indie, pop and hard-rock fans through these tours, his second LP Back to Bizznizz (featuring Kate Nash and Babyshambles), and his Glastonbury debut with Pete Doherty and Kate Moss.

After Tim "Big Dawg" Westwood ups the warm-up ante with grime and hip-hop anthems, Bizzle's opener "Uh Oh" has the mostly teenage audience bouncing. "Oi", the 2002 top 10 garage track that introduced Lethal B as part of Mo Fire Crew in the wake of So Solid Crew, follows, and Mo Fire Crew's Ozzie B comes on for the football-style chorus: "Ozzy! Ozzy! Ozzy! Oi! Oi! Oi!"

A taut, spiky guitar replaces thundering bass in Bizzle's grime-punk reworking of The Ruts' "Babylon's Burning the Ghetto", though its barbed nuances about politicians are lost in the cacophony.

It sums up Bizzle live: in grime he's a hype man, raising energy levels through a combination of his scatter-gun, rat-a-tat rap style, and hyperactive aura. Relentless touring has honed his crowd-working skills, and tonight, arms aloft, he looks like a conductor directing his fans to jump.

The mosh pit hardly needs stoking, but the DJ introduces dubstep anthem "Benga & Coki's Nite", wreaking further dance-floor havoc. Again, the detail in Bizzle's cover of The Clash's "Police on My Back", transformed into a laugh-a-verse tale of stealing cars and legging it from the police, is incidental.

"Fire", with its sample from Motown's "The Spinners" or Monie Love's "It's a Shame", depending on your age, offers momentary respite, before a tumultuous climax with "Bizzle, Bizzle" ("What's my name? Bizzle! Bizzle!"). The encore is Bizzle's biggest hit so far: "POW" reached No 11 in Christmas 2004 and is still the definitive UK street anthem of this decade.

There's no Nash, Doherty, Gallows, Enemy or Penate tonight; it's Bizzle's moment in the spotlight. His music has lost grime's traditional moodiness, making it accessible and fun without compromising its attitude and spirit.

And his masterplan of extending his fanbase appears to be working – the audience tonight is made up of hoodie-sporting urban music fans, skinny jeans and Converse-wearing indie-kids and garish nu-ravers.
at 12:38

Tiz The Season to RAVE 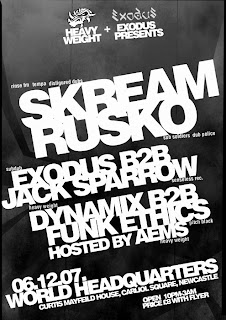 Strong is the force of dubstep in Newcastle. Big up to Dynamix the dubstep soldier who's been pushing the music for over 18months in Newcastle, way before it blew up and became the underground sound du jour.

And in further news (i couldn't upload the gif file/flyer, very annoying, sorry) - Moodyman plays Gramaphone tomorrow. He's one of the most talented, maverick and opinionated DJ/producers out there. Think deep, Detroit techno, which in Moodyman's lexicon really means black electronic music - whether house, techno or electro.

He's a controversial mofo, when I saw him live in a band at the Jazz Cafe, he wore a mask, or appeared behind a screen and refuses to be photographed. He won't play ball with the modern music industry, by chasing press in order to get coverage for his music. And perhaps most controversially believes the white man, principally Europeans have raped techno to the extent that most people don't even realise that it came from Detroit and is a deeply soulful sound, and essentially, black electronic music. An intriguing character, especially when so much modern music lacks substance, meaning and a message.
at 10:13