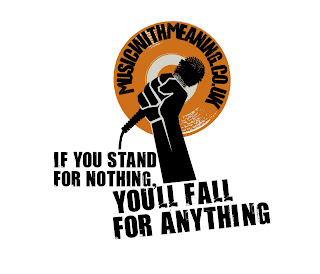 It seems apt to follow on from Akala, a rapper who has lots to say, that's postive, worthwhile and engaging, and flag up a recently launched campaign: Music With Meaning.

If you have had enough of vacuous meaningless, WASTE, music - whether that's reality tv bands, crazy frog, blinged up-jiggy-gangsta hip POP, then log onto to www.myspace.com/jointhestruggle or sign up at www.musicwithmeaning.co.uk

Apparently the 'market'dictates what we are given. The music industry, would have us believe it's only servicing our needs and wants - so ultimately we're responsible for the utter shite that constitutes much of contemporary, popular music.

So ergo, if we want that to change, we must make a stand. To quote, Fatboy Slim, 'Right Here, Right Now.'Perhaps it's more fitting to use the words of the greatest polemicists modern music has ever known, Public Enemy, 'Fight The Power.'
at 13:10

Akala - Man on a mission

Akala - articulate, informed and on a mission

A version of this appeared in Metro, newspaper on Monday January 29th.

What's to say? In our 30 minute phoner, Akala came across as a very well informed, thoughtful and passionate young man: passionate to make music with meaning, and passionate to make a difference. I'll be honest, I wasn't overly impressed with his debut album, It's Not A Rumour, mainly due to the production, rather than rap style or lyrical content, so was surprised to find he won a MOBO in 2006 for Best Hip Hop. But credit where credit is due - Roll With Us is a great single, and his A Little Darker mixtape - late 2006 - with his big sis (Ms Dynamite) is H.E.A.V.Y. And all the more so, for uniting the grime scene with the hip hop scene and pushing UK microphone music, black British music (note my lack of the use of word - URBAN), forward.

North London rapper, Akala, 23, is one of Britain’s brightest music prospects and followed in the footsteps of his older sister Ms Dynamite, in scooping a MOBO (Best hip hop) for his debut album, ‘It’s Not A Rumour’, last year. Akala is an ambassador for Rhyme4Respect, a safe sex campaign also supported by artists including Rhymefest and Estelle.

What is Rhyme4Respect?
It’s about encouraging young people to practise safer sex - the motto is, ‘Want respect? Use a condom’. It’s trying to prevent the spread of problems like STDs and teenage pregnancy – our rates are very high compared with Europe and the rest of the world. It’s something I want to be involved in because half the girls I went to school with have got kids who are six or seven years old now. So it’s something I can relate to and if artists have the power to influence young people for the positive, then that’s good.

Why do you think Britain’s teenage pregnancy rate is so high?
I think it’s a combination of things: teenage pregnancy is higher amongst working class communities – for numerous reasons such as not having a dad around. If you’re a vulnerable young lady with issues, and seek comfort from a man, you’re going to be susceptible to having sex at a younger age and have a greater chance of getting pregnant. If women are educated more and value themselves then they will say ‘no’ and ‘If you want to sleep with me then you use a condom.’ It’s unfortunate but a lot of young boys are irresponsible and the bottom line is if a boy doesn’t use a condom he isn’t going to get pregnant. He should use a condom because he can get an STD but he’s not going to carry a baby for nine months and he can piss off and do what he wants and the girl will be stuck with the baby.

Does a lack of opportunity and education also contribute?
Definitely and that specifically relates to working class communities. The girls I know that got pregnant at 16/17, because it was the only thing that gave them any value. And that’s no reason to have a child and it’s sad to be honest with you.

It seems that women in US hip-hop videos are nothing more than eye candy
It has affected the mentality of how young women think – if it’s good enough for the girl in the music video it’s good enough for me, and I’ve got to act this way and look this way. I don’t think music is to blame but music can add fuel to the fire. If you’re from a good background and your mum and dad have taught you well, you’re not going to switch on MTV and be like I’m going to sleep with this guy because he’s got a nice necklace. But if you are already insecure from a background with problems, don’t feel good about yourself and the only people you look up to speak this way, then it could be the tipping point.

What have you been doing since winning the MOBO?
I have supported Jay Z, Christina Aguilera, DJ Shadow on their UK tours, I have done my own UK tour, and the first hip hop show in Vietnam and also some shows in Nigeria. It’s been an action-packed last six months. Supporting Christina Aguilera was really good, because her crowd is not a hip-hop audience at all. It showed me how much of a market there is for UK hip-hop, if it’s good. The reaction I got was as good as, if not better, than the Jay Z audience, who knew who I was. That was pleasing because it’s not my audience at all. It was a risk, I could have got booed off but they are the some of the best shows I have done. Little old me performing to 10, 000 people eight days in a row.

Akala’s LP, It’s Not A Rumour and mixtape with Ms Dynamite, A Little Darker is out now www.myspace.com/akalamusic
at 20:12