Madness. Talk about a trend crystallizing in a day... a young French film maker Fabien, who has made a documentary on the French dance craze tektonic (see earlier posts), switched me onto this... which as he describes it is a French rapper Mokobe (like So Solid Crew) going back to his motherland of Mali and doing the tektonic thang, Mali style. And yes -for the older house heads - that's Mory Kante of Yek Yek fame on the track too.
at 13:22

Broadsheets and clueless journos who rely on PRs for discovering new music are going mad for this. Anyone who knows anything about dance or world music will be aware of kwaito, house music from South Africa's townships. What's far more exciting than the patronising, ohmygod Africans make credible dance music reaction, is the fact that this sits very comfortably alongside the sounds coming out of London's funky scene, like Crazy Cousins (see below), Donaeo's African Warrior or Jammer/Badness The Message Is Love.
at 11:50

This is a huge choon 'pon d'underground! African riddims hit London's growing funky scene and sound. BIG. This could easily be played at a 'grown up' house night, like Defected at Ministry.
at 11:08

Beat by Davinche. Love the line, 'We'll be the talk of the town like Harvey and Alesha'. I'd imagine teenage girls love this. If you don't know Tempah, he's the man behind the Wifey Riddim - below - which is two years old now, and was huge amongst the youth dem.


The official video to Sway's new single, the very catch Saturday Night Hustle. According to Radio 1 it's too 'radio-friendly' - WTF? Go figure. I've had the LP on heavy rotation and it just gets better and better. He is just about the only UK MC who can make me laugh out loud.
at 15:12

Heaviosity! Orifice and Ghetto's nasal flows kind of complement each other. I was having a chat with Mala (DMZ) a couple of months back and had been been recording with Orifice (of Foreign Beggars), for some tracks to appear on Mala's debut artist LP.
at 10:26

Has Mr Skinner rediscovered his inner city poet-self? You can download the single for free here
at 09:38 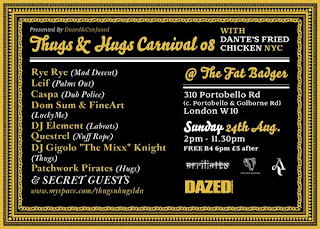 A selection of Carnival Weekend nights. Man Make Music & Thugs & Hugs in particular look heavy. I'll be in India, and missing, the best Bank Holiday of the year :-0)
at 20:20 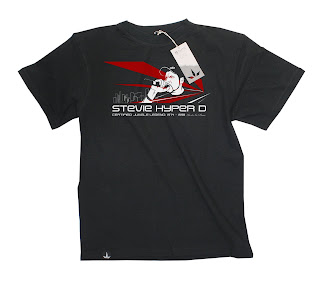 THTC have come up with a tribute tee to the jungle MC legend that is Stevie Hyper D. THTC have been pushing eco-friendly, organicac hemp tees for five years plus. Here's the PR blurb on this Tee, get one here

Staying true to their musical following, eco-clothing pioneers THTC are releasing a special edition t-shirt paying tribute to legendary drum and bass MC Stevie Hyper D to mark the 10th anniversary of his untimely death. This iconic collaboration celebrates the life and art of Hyper D a decade after his death sent shockwaves through the music community.

THTC is highly respected and supported by some of the biggest artists and musicians around the globe. Their range of cutting-edge eco street wear with urban musical influences and exclusive collaborations has taken the fashion industry by storm. THTC has worked with some of the drum and bass scene’s biggest names, including Nicky Black Market, Goldie, Mickey Finn, Nookie, DJ Hype and MCs LowQui, Stamina, GQ, Dynamite and Five Alive.

Hyper D was acknowledged as one of, if not the greatest drum and bass/jungle MCs of all time, and was widely known as an innovator of his own style of double time chat. He has posthumously gone on to inspire hoards of MCs whose styles have clearly been heavily influenced by the legendary pioneer. When he passed away on July 4th 1998, the world lost one of its finest MC’s, a man the drum and bass community bowed down before. His sudden death, like his music, is still widely mentioned in music forum discussions today.

The design has been created by Nick Purser, who has produced many well known designs within the drum and bass scene, including artwork for Hospital Records, LTJ Bukem and Andy C. Find out more at www.nickpurser.com.

The t-shirt - which will be sold through www.thtc.co.uk and limited selected stockists - is made from THTC's famous blend of 55% hemp and 45% organic cotton, bringing eco-consciousness with an iconic message to a wider audience. This unique collaboration is one of its kind and has been made possible by Darrell Austin, (Stevie's nephew), and long time DJ and friend Nicky Black Market, who will both be endorsing and promoting the design amongst the drum and bass scene and are available for interviews.

THTC was established in September 1999 by brothers Dru and Gav Lawson, who are also founding members of the Ethical Fashion Forum (EFF). THTC also support BBC Blast, the Make Your Mark in Fashion campaign and help run educational workshops around the UK.

All THTC / Eco-T product is now made in a cutting edge facility in Eastern China that has exploded traditional methods of exploitation in the garment industry and radically redefined how business can be done. This facility is a shining light and together with THTC and Eco-T has formed a partnership to bring the finest quality organic and sustainable clothing to market.

In the document below are outlined some of the benefits of our production process. The result of these benefits is an end to piece rate work and employee exploitation, and an end to poorly made, rushed and low quality goods. In their place comes product made and checked to the highest standard, from certified fibres and made in a certified facility and by individuals who are treated equally, as friends and colleagues, who are provided with the highest benefits and who are respected and honoured for themselves as people, and not simply workers.

The costs overall are between 25-35% higher than a similar garment sourced from another factory without the ethical and quality standards in this facility. But we at Eco-T feel this is a small price to pay for the benefits to the environment, staff and quality of product, and therefore for our own customers and for all of our peace of mind.

Our prices reflect the true cost of garment production made in a fair way and with minimum impact. We believe this is the only way the global garment industry can progress and our transparency allows our customers to be empowered knowing the product they buy from us will have a positive impact on people and the planet as well as being the highest quality for design and production. This is, after all, why we started this business in the first place.

The facility is based in Shandong province, Eastern China Seaboard.

Certification:
The facility is working towards IMO certification (www.imo.ch). This certification is based on several sets of key baseline standards such as the ILO conventions, FLO Fair-trade standards, SA8000, and IFOAM Social Criteria.

The fibre aspect of the IMO certification is based on the GOTS (Global Organic Textile Standard) that the IMO helped developed. This is a very high standard developed in several continents and agreed across many garment and fibre industries.
at 10:32

In terms of his tuneage, yes! New Roots tune, from new LP Slime & Reason (Sept 1st). This is BAD. It starts off happy, carefree and on the abstract pop tip, the second half is typical Mr Manuva, pensive, worried and shoe-gazing. Big Up man like Toddles T, for producing four tracks on the Manuva LP, boy done good, you dun know. The Shefeel' alliance is killing it.
at 09:41

Sway's new single ahead of the release of his Signature LP on September 29th. The LP is everything you would expect and more - witty, sharp, wry, clever and very, very personal and moving.