My blog has moved to rahulverma.org

As you might have noticed I've not been blogging or posting much here. Truth is I've been flat out studying a Masters for the last two years which hasn't left much time for work let alone blogging for fun, though I have been doing odd bits and pieces to pay the bills as I complete this Masters. So what doing a Masters and having a good long think about what I'd like to do going forward, it felt appropriate to get with the 21st century and set up a proper website that's my portfolio and blog and generally a polished web presence. I'm not sure I'm at the polished stage of the project yet, but I hope to get there, sometime soon. So this is a post saying this - rahulverma.org - where you can find me and what I'm up tohope to see you over there, sometime soon.
at 17:27

Apologies for the lack of posting recently. I've been away on holiday for my good friends Ravi and Sapna's wedding in Goa. Very beautiful and super-chillaxing it was too. It's back to the grindstone now though and as you may or may not know, today Plan B won three Ivor Novello Awards - the Ivor Novello Awards are the creme de la creme of music industry award ceremonies, for people who write and craft proper songs.

And in honour of Ben Drew, here's an interview I did with him five years ago around the release of his debut LP, Who Needs Action When You Got Words, which for me is one of the most powerful records I've heard, eliciting a response both physically and emotionally. From the moment I first heard him, you knew he deserved greatness, so it's heartening that he's achieving that as the music industry - depressingly - is littered with supremely talented individuals who don't make it for one reason or another.

Thankfully by softening his sound, but in no way tempering his emotive storytelling, he's getting the recognition he deserves. 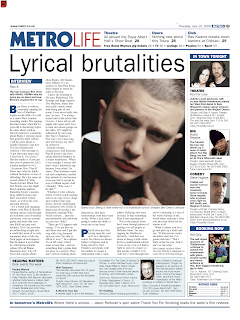 
Ben Drew is restless, constantly tapping his box of Marlboro Lights on the table of a café in a smart West London recording studio.

The tapping becomes faster when the 21- year-old is discussing topics he cares about, such as David Cameron's comments about Radio 1 playing music that glorifies knife culture ('All he cares about is middle England') and how 50 Cent romanticises violence ('His message is: “I got shot nine times and I survived it. I'm a hero.” But the reality is if you get shot you're gonna die. He's a lucky motherf****r').

In person, Ben 'Plan B' Drew says what he thinks without hesitation or fear of offending. He's the same on record: debut LP, Who Needs Actions When You Got Words, sees the slight East Londoner address Damilola Taylor's murder, drug-riddled estates and their associated violent crime, as well as his own personal demons.

It's a brutal and engaging album, with Plan B literally spitting stories, told through an ensemble cast of familiar characters, over an acoustic guitar and beats that veer into R&B and pop soul territory.

On it, he provides an unflinching insight into a world that most of us only encounter when it hits the front pages of newspapers. But he makes it accessible by referencing popular culture (David Blaine, Basement Jaxx, City Of God) and current affairs (Ken Bigley, Jill Dando, Gary Glitter).

It's no surprise to find Plan B has been shaped as much by indie as hip hop. 'I grew up listening to Nirvana, Radiohead, The Prodigy and Rage Against The Machine, music that was really varied, rather than being part of one scene, I was never really into that,' he says. 'I've always stayed true to the artists that I loved – I have all my old jungle mix tapes and I love to hear old school garage on the radio. Or I might be influenced by one song, like Tracy Chapman's Fast Car; I love that song and will always say she's an influence.'

Despite myopic comparisons with Eminem, Plan B doesn't shy from citing Marshall Mathers as a major inspiration: 'When I was younger I always felt that I wasn't allowed to rap because I was white,' he states. 'Then Eminem came out and completely crushed that attitude for me because everyone had to accept he was a brilliant rapper. And I thought, “Why can't I do this?”'

'There are US rappers only saying, “I've got this car and these rims and I got this ring with a big diamond and you won't be able to afford it, ever,”' he explains. 'F**k off, man. I don't want to hear that – tell me something that's gonna help me grow as a person. They don't tell me nothing about themselves, like their relationships with their mum or dad. Write a lyric that's going to make me think or touch me in my heart.'

Plan B does just that, laying open his soul as if on a therapist's couch. He likens his absent father's religious zeal to being raised by Ned Flanders and pleads with his mother to escape a relationship with a crack addict. Bullying also rears its head. Is that something Plan B has experienced? 'Not in the typical sense but I went through phases of getting s**t off people at different times,' he says, tapping his Marlboros furiously. 'And that was down to being a little white kid in a multicultural school. I was on my own so I had to fight to earn my respect so that people wouldn't f**k with me. I went through that and it's daunting, it's one of the worst feelings in the world when someone's after you and your blood for no reason at all.

'What it makes you do is go and pick up a knife and say: “If that person comes anywhere near me, I'm gonna stab him.” That's knife crime for you. And it ain't no rap song.'

So here's a feature I wrote for Metro newspaper recounting the Brixton Riots of 1981 by three eye witnesses. It came out on Wednesday April 6, so apologies for the lateness in posting this.

It's a story that's close to my heart, as I've lived in Brixton since 1999 and remember when I was first looking to move to Brixton in 1998 after a hungover Saturday morning of flat viewings, my sister and I stopped off at a cafe just off the Brixton Road by the tube station and a Reclaim The Streets party kicked off - total mayhem, with soundsystems parked in the middle of Brixton Road and dancing galore, ensued. I remember being seduced by its counter culture, anti-establishment spirit. Thank god my sister and I couldn't afford Clapham, where we had originally intended on living.

One of the best decisions of my life, to be honest - Brixton's where I live and work (with young people from the local community as part of LIVE magazine), and feels like home, whether it's the Afghanistanis and Pakistanis bantering and haggling in the market, or the characters that come out to peacock when the sun's shining, I feel more at home here than anywhere I've lived including where I grew up. 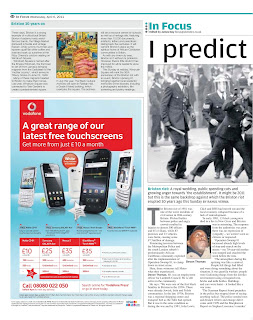 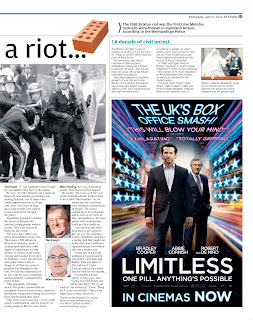 Round up of current electronic music (3.11) for Metro 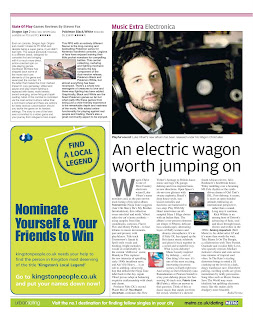 This ran in Metro on March 11. It's such a brilliant time for electronic music at the moment. I'd honestly recommend to all my friends that they buy all of these releases. And also keep an eye out for Africa Hi-Tech, Kode9 and Instra:Mental LPs due in April and May.
at 14:41 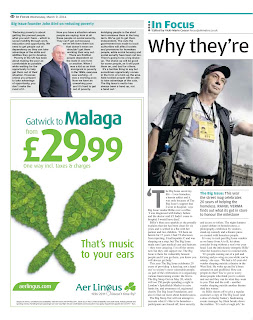 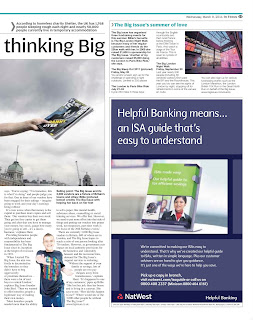 So here's a feature I wrote that appeared in Metro last Wednesday on The Big Issue's 20th anniversary and their fundraiser The Big Sleep Out in May.

This is the first time I've managed to upload a PDF to blogger, so big shout out to the forums, that solved this problem which has been bugging me for years. (Now I've got five years worth of PDFs to upload, joy).

In summary here's a few bullet points about the story and Big Issue which might well entice you to read it properly, or even better sign up to do the Big Sleep Out.


* The Big Issue receives no public money, at all. That's despite working with OVER 3000 vendors and homeless people each year. Hence the need for fundraisers such as The Big Sleep Out

* Westminster Council is on the verge of banning homelessness in the borough. No really, actually ban homeless people from being in the borough. So instead of helping people, they're moving them on. (NB - I wonder if this has anything to do with LDN 2012?)

* The Big Issue provides support and services (medical, psychological, addiction treatment) to a multitude of people who aren't vendors.


* The Big Issue is 20 this year and is a social enterprise (it's a business that makes money for social good) founded in the midst of the recession of the early 1990s when homeless numbers soared through a rise in unemployment and repossessions. Which is exactly the perfect storm we're experiencing in 2011's 'economic downturn'

So a few weeks ago, it was Social Media Week in London, and I was invited to talk on a panel about Music and the impact of social media, which basically covered the do's and do not's, how it's changing the industry and how to best use it.

To be honest all you need to know is in the video above and genuinely a few people have contacted me out of the blue to say how useful and informative they found it.

I thoroughly enjoyed stepping out of my world of music journalism and chewing the fat with fellow panelists Raj Kotecha founder of Creative Content Agency, David Haynes VP of Business Development at Soundcloud, and MTV Wrap Up’s Babatunde Adefuye.

Sumit from the Hip Hop Chronicle chaired the lively chat.

It was definitely very good to step beyond social networking and meet interesting, insightful people and make real life connections.
at 17:51